Many consumer and commercial 3D printers work off of a system called stereolithography (SLA, for short), which was first patented in 1986. The machines use UV light to harden thin layers of resin one by one. The object needs to lift off of the platform before the printer can move on to the next layer.

Using SLA isn’t exactly ideal. Chief among the reasons: speed and detail. So California startup Orange Maker is introducing a new spin on 3D printing. The company’s method, called heliolithography, claims to print objects faster and with greater accuracy than ever before.

The problem with SLA printing is that when the model lifts off the platform between layers, adhesion forces can rip it, causing defects and failed prints. 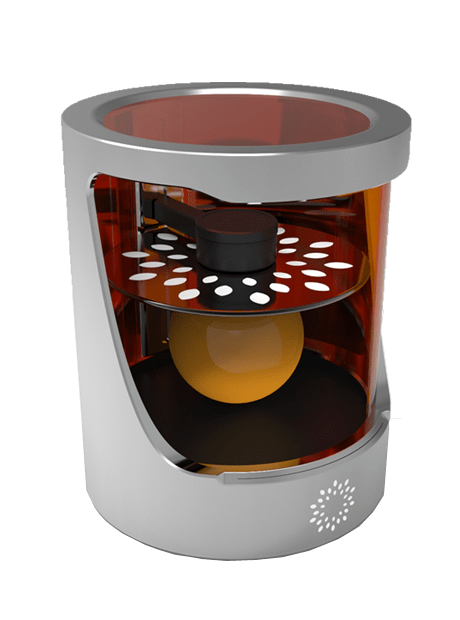 The core idea of the Helios One, a desktop 3D printer that Orange Maker plans to release this year, is that it can print continuously. Instead of moving a light source back and forth across layers of resin, the platform on the Helios One rotates as resin hits the surface. Objects are printed in a spiral instead of as one flat layer on top of another. In doing this, the printer doesn’t need to pause as it severs resin between layers. The development team also traded in the standard SLA light source, UV lasers, in favor of one they say is better suited for continuous printing. Though the team won’t reveal what the light source is, they claim it reduces the risk of botched prints.

Compared to fused-deposition modeling (FDM), the method used by MakerBot printers to print everyday objects like iPhone stands and figurines, heliolithography can handle larger prints, such as chairs and replicas of large-scale sculptures.